Time for another FF story – prompted this week by this photo and led by the inestimable Ms Wisoff-Fields. A few notes and thoughts on process follow the story for those who are interested, but you are welcome to just read the story itself. Critique and comments are always welcome. 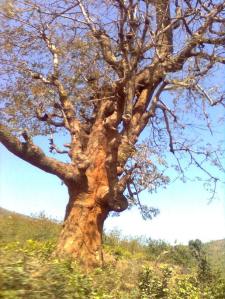 “She was beautiful. Gnarled, craggy and deformed, but absolutely beautiful.” He sounded wistful.

“Euthanasia? You’re telling me this was an act of kindness?”

“In the rainforest, there is so little space, light and nutrients, one tree has to die before another can grow. Every death is a rebirth. A sacrifice of one generation for the next.”

Sparrow had heard enough, she knocked on the door and waited for the guard to arrive.

“Sick bastard,” she muttered as he closed the door behind them.

When I first looked at this picture, a few ideas sprung immediately to mind – the idea of a crooked family tree, for example, full of dark places and flaws, or an old man remembering all the scenes from his life that the tree had seen. But when I actually started writing, this is the story which popped out.

Until half-way through, I hadn’t actually decided what this story was. I thought it was about a farmer who had cut down a tree because he didn’t think it would be happy living in the middle of a housing estate when the land went to be developed. And then… well, I don’t really know what happened, but we ended up in some sort of Silence of the Lambs scene, with a murderer who believes his own justifications and a still-innocent agent trying to make sense of him. After that, her name was the only thing left to decide, and then a bit (a lot) of tweaking to cut 147 words down to 100.

I actually think any or all of the others might be interesting to write, but it was hard enough to get this one down to 100 words and I think they would all need to be longer. Maybe I’ll come back to them later this week, if I get a bit of time. ***Update: Two other stories  from this prompt can be found here