It’s Christmas (or Thanksgiving if you prefer).The family’s come round. You’ve cooked a turkey and all the trimmings. It’s all come together beautifully and everyone’s sitting round the table tucking in. 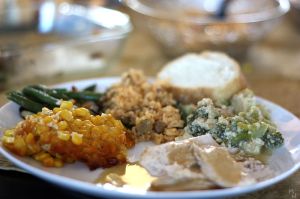 Auntie Mabel pipes up. “Shame about these potatoes. I always think roasts should be soft on the outside.” You smile sweetly.

“I don’t know,” Uncle Peter replies, “They aren’t well done enough for me. And the bird is greasy. Could someone pass the gravy?”

“Well I think it’s all perfect.” That’s your brother, ever the peacemaker, although you notice he’s avoiding the potatoes too. “Thanks for doing the cooking, sis.”

There’s a general nod of agreement and then someone changes the subject.

Later, over the washing up, your little sister brings up the subject of the dinner again. “I don’t know if you’ve ever tried it,” she says, “But I read somewhere if you put two halves of a lemon inside the bird, it cuts through the grease – makes the meat a bit easier to digest.”

The last comment of the day comes from your husband, as he’s climbing into bed. “Triumphant dinner, darling. The gravy was particularly delicious. We should look for another recipe for roast potatoes though, they were the only weak point in what was otherwise a masterpiece.”

When I posted about feedback last week, I said I was in favour of any feedback. Some of you disagreed, and I can see why. The Mabels and Peters of this world are tactless and ungrateful. Some might say they should have followed the maxim “If you can’t say anything nice, don’t say anything at all,” and in the context of a family dinner, that’s probably true. But on the other hand, feedback is useful. If you can get past way it’s given, they have a valuable contribution to make, which might improve next year’s dinner – the potatoes were disappointing and the meat was OK, but greasy.

The brother’s feedback is nice, because it makes you feel appreciated, and more likely to persevere (host again next year), but it’s not actually very honest. Or very useful if you’re trying to improve.

Your sister is tactful and useful – she makes a concrete suggestion in a way which invites you to take feedback as it should always be taken and given: as feedback on the product not the producer.

And the husband, of course, is the best of all. He sticks to specifics (gravy, potatoes), gives a feedback sandwich (good, bad, good) and he makes it completely non-personal (we not you).

But if you can train yourself to receive feedback constructively, all feedback has its value, even at its most tactless.