A World Of… continued

Apparently, the boys haven’t quite finished their argument…

“Anyway, it’s not an elegra… whatever you said,” Matty continued. “If you put the words together, you get el…gi…ti…zeli … elgitizeli!”

I was inclined to agree, but Luke is clever. And a perfectionist. If he’d picked a name for the creature he’d drawn, he’d have his reasons.

Friday Fiction – A World Of…

Short on time this week, so I’ll just say thanks to Rochelle and EL Appleby for hosting and providing the picture respectively. As regular readers will know, feedback is always welcome, and as long-term followers may notice, these boys have been around before.

ADDENDUM: If you have time, there’s a bit more of this story here 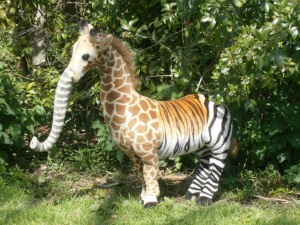 “It’s a world of ridiculous is what it is.”

I can hear the boys arguing again. Luke’s been drawing so it’s probably about that. Matty likes to tease him when he gets home from school, and I’m worried he’s being bullied, and taking it out on his brother. My husband says it’s just what boys do.

Matty’s new phrase makes me laugh: ‘A world of’ whatever. I mustn’t, though. I must be the serious parent and discipline him for being mean. Then I catch sight of the picture. And it is … it’s a world of ridiculous.

Language note: I didn’t see the tail at first, so it was going to be an elragra. Of course, inspiration not illustration and all that, but I think the new name works too. For those who can’t work it out: