Here’s the fourth installment of my Voice Week entries. You can see what it’s all about, and read the first installment in Monday’s post, then #2 and #3 yesterday and the day before. The voices are designed to be read in any order. 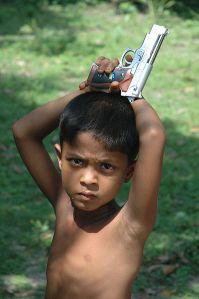 Guns in the Toy Box

I understand he wants to see his heritage. I just never imagined it like this. He says he’s among friends. He calls them his brothers. But you hear stories. How they’re so deeply brainwashed they see the enemy among their comrades. He says he’s careful: prays away from the others, doesn’t rub his faith in their faces, but a Mother worries. Can these boys really tell a radical Muslim from a good follower of the Prophet?

And what about the locals? Will they see him as a hypocrite – an invader who should know better?

In sha’Allah, he will be safe.