Rochelle’s own picture for our prompt today, and while I’m here CONGRATULATIONS to our great leader who recently retired from the job, ready to focus on the career!

There is a beautiful cacophony as I type – Dominic is grumbling at his jungle, which is singing back to him. About five of Sebastian’s toys are also singing / talking, an he is giving a running commentary on the game he’s playing with them. I cannot hear myself think, so this story is influenced by that, together with the fact it’s written in five word bursts in between dealing with one or other of them! The story stands alone, or as part of the series here and here. 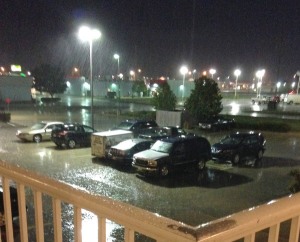 Whenever a black sedan pulled into the lot below, Sandy felt sick. And in the rainy dusk, every sedan shone black. She turned back into the dinghy motel room.

He won’t come, she told herself. He doesn’t know where I am.

And if he did, he wouldn’t be in his own car; more likely he’d fly like she had, and rent one.

He could be driving anything.

She turned on the radio. Music drowned out the rain, the tires splashing into the parking lot, even the sex nextdoor, but it didn’t stop the voice in her head.