No time, no time, muttered the rabbit. Tomorrow, I am giving a public reading of a 1000 word story and I either haven’t chosen it yet from my existing repetoire, or haven’t written it yet if I need something new. But FF is an addiction, and this story wanted to be told, even though I had to beat and crowbar it to make it 100 words. I’d be interested to know if you think it feels overworked, and if the character I was trying to draw still came across after the edits. It’s inspired by Marie Gail Stratford’s picture below, in in particular by the juxtaposition of two words on the picture. I wonder if they both stood out to anyone else. 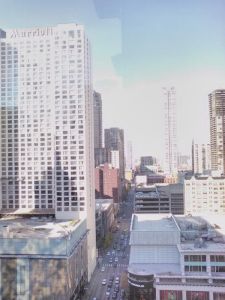 Angie reapplied her gloss. It was an unlikely place to meet the man of her dreams – especially when he’d be busy wowing the conference bar across the street – but a girl should be ready.

Trying not to think about her boss, she reordered and found guilty pleasure in the barman’s flirting. It was a long time since anyone laughed at her jokes.

Any longer and she risked liking him, then disappointment when nothing happened. Angie dropped a couple of extra bills on the bar and walked away from a half full glass.

Tagged as 100 word story, Friday Fictioneers, Love, Sex, The Risk of Not Taking a Risk

Another week, another picture. This time from Ted Strutz. I’m over 200 stories now, that’s more than 20,000 words in 100-word chunks and enough for a novella! Your feedback on this one is welcome. No offense is intended to either of the locales mentioned; everywhere has its good and bad parts, and its good and bad people. 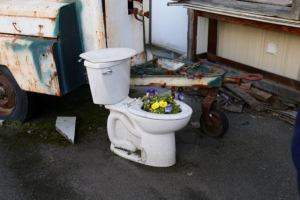 Her brothers, who’d never been further than Romford, described India as ‘the toilet of the world’, but Stacy liked the idea of endless curry, and helping people who had even less than her. Being thousands of miles outside their shadows wouldn’t hurt either.
The curry was a disappointment, tasting nothing like the real stuff back home, and some areas did smell terrible. But three weeks in, she found herself not minding. The love of the children she taught made it all worthwhile, and Stacy, against all her brothers’ warnings, found India a fertile place to plant some roots and grow.

It is Friday, after all. So, better late than never, here’s my story for Rochelle’s own picture prompt this week.

It’s arguably not a story, but it came to me all at once, and when I typed the last word you see below, I noticed it was 100 words exactly, so I couldn’t resist the feeling it wanted to be posted as is. Apart from changing one adjective that didn’t seem quite in keeping, I haven’t changed it at all, but I welcome your feedback.

Everything in Grandma’s house was old. Grandma herself, obviously, had been alive long enough to remember black and white television, Nixon and the Civil War, and she had a telephone that plugged into the wall and you had to stand right there in the kitchen if you wanted to talk, because you were tethered there like a goat.

But the oldest thing in Grandma’s house was the golden clock. It never moved. Uncle Joe said it was right twice a day, but Grandma said it told the time she met Grandpa and was always right. I liked Grandma’s version better.

Well, this story really didn’t go where I thought it was going. Consequently, it really has nothing to do with the photography from Emmy L Gant that officially prompted it, unless you count a general colour scale, but that’s coincidental. Still, I offer it to you, for your thoughts and feedback. If there’s too much confusion I’ll try to post an explanation as and when time and children permit.

V saw the girl immediately: wearing black and slouched in a corner as if she could somehow disappear there. Classic emo. She’d see V’s scars and say “Me too,” then she’d flash a few of those deep-enough-to-look-good-but-not-really-hurt scratches on her forearms and pretend they were the same.

V headed for the opposite corner, dropped her bright yellow backpack and pulled out a jotter plastered with smiley stickers. She started sketching butterflies around the first page and hummed Justin Bieber loudly.

“New school, new beginning,” Dad had said. “And none of that misery nonsense goes with you.” Like emotions respected walls.

Why don’t I recognize Sean Fallon’s photo? I thought. I’ve been joining in with FF for over five years and Rochelle’s reruns are normally a chance for me to take a break and a trip down memory lane. Then I noticed the date: 15 November 2012. Eleven days after this.

All of which meant I needed to write a new story, but I already had the perfect one in my head. A memory, from roughly eleven days ago. I am usually a stickler for exactly 100 words, but today I’m struggling to get it down, so the current count is 120. I hope you’ll forgive me, or suggest where I can do some pruning.

EDIT: There. 100 words. I knew it must be possible. Thanks especially to Rochelle, for her suggestions.

I was finally talking to an adult, discussing escaping to a spa, even just a bar. Then something spikey was thrust into my hand.
“Finn’s siren’s not working.”
I squeezed the toy. It whined like a distant cat fight.
“I think the battery’s dying.”
“We can take him to Grandad Dog’s garage.”
“I think we can probably do it ourselves,’ I said, removing the battery cover and accidentally pressing the ladder.
“Faaast and feeearless, I’m Fiiiirey Flynn.”

I smiled. Fast and fearless is all very well, but you’re not fooling me. I know all about needing to recharge the batteries.

WRITERS (Particularly Torontonian ones, but it’s open to anyone)…

Check out this writing contest run by my local writing group for a super-short piece inspired by the 506 Streetcar. Prizes are publication in the Beach Metro News and star billing at our public reading at the end of the month.

Go on, you know you want to!