Friday Fiction will be back next week – in the meantime please enjoy Voice Week – a 100 word story each day this week.

Did you meet Brenda yesterday? Did you find her the same grumbling, middle-aged busybody, who discovered her neighbour in the trash a few weeks ago? Brenda was hard for me because I don’t know anyone quite like her in real life, but also because she is North American and I never manage to catch all the Britishisms in my writing. How did I do yesterday?

Today, it’s Charlotte’s turn and I feel like I’m on safer ground, but do le me know what you think about her.

And she’s gone. If I can just shift her slightly off my… Shit. Shhh, shhh, twinkle twinkle little star, how I wonder what you are … That’s it, back to sleep, sweetheart, shh shh.

Now. To peel it, one-handed, without moving. No, no. Shh. Rock-a-bye baby, on the tree top. Mama put you up there so she could eat a banana. Or have a nap. Or … no, Charlotte, don’t even think about a toilet break or you’re doomed.

On a personal note…

Amazingly, Sebastian is six months old. He’s already got two teeth, can sit up unassisted and has eaten his first ever non-milk food! I can’t believe how grown up our little boy is getting, and it’s only going one way.

So, although this isn’t a parenting blog, I have decided to allow myself an off-topic post just this once. To get a few things off my chest – for anyone involved with new parents.

If it’s not your baby, try to resist the temptation to give unsolicited advice. I know, sometimes the temptation is just unbearable, and occasionally your advice will even be helpful, but most of the time, it will upset the person you give it to. Either a) they’ve already tried that; b) they can’t do whatever you’re suggesting; c) they have already considered it and decided against it for reasons they don’t want to explain to you; or d) if they haven’t thought of it, your suggestion has just made them feel like a failure (this is a common feeling for a new parent, and completely disproportionate to anything, because they are tired, stressed and overwhelmed).

If you must suggest something – and really, in most cases, that’s not how it is – the safest way to do it is to couch it in empathetic terms. For example, new parent is finding it impossible to get baby to sleep. You think they could try X.

DO SAY: Oh, isn’t it terrible when they won’t sleep? Is there anything I can do? When [my son / daughter / my sister’s brat / whoever] couldn’t sleep, we/she tried everything. Finally, we did X and it seemed to help a bit.

Oh the fashions of parenting. When I was a child, babies couldn’t be put to sleep on their backs for fear of choking, swaddling was frowned upon because it “restricted growth” and formula milk was a perfect substitute for breastfeeding. Now, the only way for babies to sleep is on their backs (to avoid SIDS), swaddling is a great way to calm your baby and anyone who doesn’t breastfeed is a terrible mother (please see below for my actual opinions on this). It’s a wonder any of today’s parents survived.

The truth is, you can find evidence on both sides of almost any parenting question. Everyone who has an opinion is adamant that their way is right and the other way is insane. As a new parent, the only way I got through was to take all such advice on board, consider it, and then do what worked for us. If you have a strong opinion about parenting, leave it with your advice – locked up inside.

Worthy of a whole post, if not a whole blog, of its own. These days breastfeeding is IN. To the extent that if you don’t, you get guilt-tripped by healthcare professionals, really nasty comments from strangers, and generally bullied by society. But there are a few things noone admits about breastfeeding, and therefore new mothers discovering these things can feel isolated and can really struggle. So, I’m going to admit them:

It’s hard. Babies and Mums aren’t born with an in-built knowledge of how to do this, it takes time and practice and perseverance, at just the period when Mum’s at her weakest and most overwhelmed, just after the birth.

It invites people you barely know to discuss your breasts. And that’s just not cool. As I once ranted about pregnancy – if a topic was off-limits before, it’s still off-limits now.

Some people can’t. Some women’s milk never comes in, or doesn’t come in sufficiently to feed without supplementing. Some babies just never get the hang of it. There are ways and means to help those struggling, but sometimes it’s just not going to happen.

Some people don’t want to (and that’s fine too). Breastfeeding means Mum has to do EVERY feed for the first several months. She can’t take a break because she’s exhausted, overwhelmed or has broken her arm, and that really means she can’t go out for more than an hour or two without taking baby along. It also restricts Dad’s relationship with the baby, and a couple might decide that’s not worth it.

*** An aside – before I had Sebastian, I bought a nursing cover from this company. It’s one of the best baby-things I own. Not only it is a great nursing cover, it has also served as a blanket for Sebastian to wriggle on when we’re out and about, a sun shade for him to hide under when we took him boating, a distraction remover when he went through his “distracted feeding” phase, a burp cloth… It’s brilliant! ***

You can’t go far wrong giving gifts for a baby. Something you’ve found useful (whilst understanding it might not work for this family), clothes (if in doubt, go big, babies never shrink but they sure as sure do grow), money / giftcards (have you seen how much nappies cost?!), something you’ve made will be treasured (if that’s your bag)… we’ve been so fortunate to have many wonderful gifts for Sebastian and we are genuinely grateful for them all.

Remember that saying “school days are the best of your life?” and how, during your school days you hated being told it, because school days don’t feel that great at all when you’re there? Well, parenting is similar. If one more person tells me to “enjoy every minute” or “treasure these moments” or “you’re going to miss this” or anything else along these lines, I’m liable to give them a black eye.

Parenting (of any age, I imagine, but certainly of a baby) is not easy. We’ve got one of the calmest, most chilled, happiest babies I know. He slept through the night from 2 months (whisper that, friends of mine hate us for it), he only cries when something is really wrong, and he’s avoided most of colic, cradle cap etc trials of infanthood (so far). BUT it’s still be hard. You’ll probably have noticed the repeated use of the word “overwhelming” in this post, and that’s the best way to describe it. We love Sebastian as much as any parent could, but sometimes parenting him feels overwhelming.

So I will not enjoy every minute, or even try to. I enjoy many many of the minutes, but there’s nothing wrong with me just because I have minutes I don’t enjoy, and the same goes for every other parent I know.

Luckily, the latest fashion in breastfeeding advice says there’s nothing wrong with a few drinks. So, as Sebastian will tell you, we can occasionally hit the bottle! 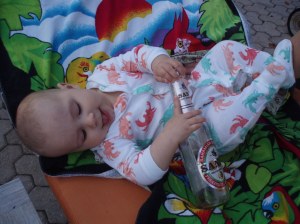