My story for InMon on Thursday raised a great comment from Stuart, including the observation that he’d sometimes struggled to identify who was speaking. The scene involved three girls, discussing the Narrator’s one night stand the previous night, and I know what Stuart means; it’s a challenge I hate as a reader and face as a writer, so I thought I’d stop and deal with it in more detail today.

When I discussed this with my writing group on Saturday, we decided that sometimes it doesn’t matter which friend is saying every single comment – what’s important may just be their effect on the narrator. But as a writer, that’s a really brave call to make. There will be readers who will be turned off the story by this, and those readers might occasionally be the ones who decide whether you get published or not! So, how do we deal with this problem?

The most straightforward way to avoid confusion is to use dialogue tags, most obviously “she said” or “said Alice” etc. Whilst it’s good to occasionally mix things up and have someone squeak, shout or whisper, for the most part, writing guides discourage too much imagination on dialogue tags – we read “said” without slowing down, but anything else disrupts the brain’s concentration on the dialogue itself, apparently.

But putting “said Alice”, “said Louisa”, “I said” after every line of dialogue gets a bit tiresome after a while. And most of the time, dialogue tags come either in the middle or at the end of the speeches they refer to – ideally, the reader doesn’t want to wait that long to find out who’s speaking.

It’s a step up from tags to actions. For example: “Who cares?” Alice had let go of the gain control again.

This allows you to identify Alice as the speaker without any sort of tag. The rule here is, one paragraph per person, so if the action is in the same paragraph as the words, it’s done by the speaker.

Watch out for the tag / action distinction so bemoaned by writing coaches. You can speak and smile, for example, but you cannot smile a speech. Compare the punctuation in:

“Have a biscuit,” Evan smiled.

“Have a biscuit.” Evan smiled.

The first version implied that Evan smiled the words, which is impossible. In the second, someone says the words (and because it’s in the same paragraph, we can assume it’s Evan) and Evan smiles.

The fanciest way to distinguish between speakers is through character. In a super-short story like Thursday’s, that’s not so easy to do, but it’s a skill I definitely need to work on even within those boundaries, and in a longer piece it’s imperative.

The goal is for the reader to know your characters so well, they know who is speaking from the words they say. Think about your favourite book or TV show. If I gave you a few lines from it, you’d probably be able to tell me who is talking.

This is another danger zone: take it too far and the characters become wooden or caricatured. But there’s definitely a happy medium. I struggled to differentiate Louisa and Alice on Thursday because I made them so similar. Of course they are similar, they are friends, of the same age, living in the same place. They have shared idiom and experiences. But even when we lived on top of each other at university, my best friend and I didn’t speak exactly the same way. I’ve been with my husband more than a decade, but he and I are definitely distinguishable in the way we speak too.

So if I were to go back to Thursday’s story and improve it, I’d work on the girls’ characters some more. I’d find the differences between Alice and Louisa in particular, and the Narrator too, and I’d bring them out better in the dialogue.

A note on duologue

All the above still works, but if there are only two people speaking, it’s a little easier. As long as you punctuate and paragraph correctly, the reader can follow the exchange like a singles tennis match between them, with just the occasional tag to orientate us occasionally so we don’t get lost and have to count up half a page.

Sometimes, you can be sneaky and put names into the speech instead. If Sarah and Pete are talking and someone says “What do you think, Sarah?”, we know it must be Pete. But in real life most people rarely actually say each other’s names out loud, so use this sparingly. And still aim for top marks where you can.

I once wrote an entire 7000 word story as a duologue between a brother and sister. There was not a single word outside the quotation marks: no tags or actions, just the words they spoke, like a radio play. But for the most part (not entirely, it still needs work), I think you can tell who is speaking because of a combination of the other tricks mentioned here.

If you’re working on a story right now, how do you make it clear who’s speaking?

In my endeavours to write better, I’ve recently been reading this book on Dialogue by Gloria Kempton. 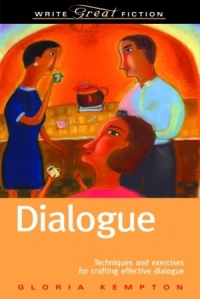 As I’m only part-way through, I’m in no position yet to review the book, but it’s opened up a can of worms I’ve long avoided. Kempton states that there are different types of dialogue for different types of novel – cryptic for the literary novel, magical for romance and sci fi, descriptive for literary or historical, etc. For now, I’ll ignore the questionable legitimacy of this assertion in favour of the question it raised for me. It’s a question I hate being asked: What’s your genre?

Everyone who knows anything about publishing says you have to know your genre before you try to get published. It affects which agents / publishers you approach, how you approach them and what happens after you do. Not to mention who your target audience is and therefore how you write in the first place.

And in many cases it’s obvious – without hesitation I could identify the genre of 80% of the books on my bookshelf. The problem is, most of what I write falls into the 20% I can’t identify: books by the likes of Jodi Picoult and Lionel Shriver. “Mainstream fiction” is the closest I’ve heard to an identification, but it’s a tough category to nail down and feels like a bit of a catch-all.

And then there’s the secret romantic in me. Of the stories I make up and don’t write down, the vast majority have at least one foot planted in the Romance genre. Not Mills and Boon / Harlequin romance, not even light Summer Read chicklit, but definitely a healthy dose of boy meets girl. Why don’t I write them down? Lots of reasons, and probably some you’d need a psychoanalyst to dig out. Whatever the reason, I don’t. The stories I write are grittier, often have male protagonists and rarely involve romantic love. People who’ve read a lot of what I write claim I always kill someone off and tackle the darker side of life.

But Kempton says we should look where our dialogue falls, and identify the genres we are strong in, then try them out. So maybe I should have a bash at typing up a romance sometime. It would certainly makes that question at the top easier to answer, and it might even be my lucky break!

A Writing Challenge – Tone of Voice

Who hasn’t either had or heard the argument: “It wasn’t what you said, it was your tone of voice”? Tone of voice is one of the most powerful communication tools we have in conversation. Words in themselves can mean a million things, but add tone of voice and there’s no mistaking the intention. That argument probably started because the other party said something apparently innocent but poisoned it with the barbs of emotion that tone of voice can add.

As I embark on the ship of parenthood, I’m struggling with tone of voice when I read aloud to Sebastian. I pick up a novel, and I start to read, but the stage directions always come after the lines. For example, here’s the latest passage in Rose Tremain’s “The Road Home”:

Now, when I read the first line, I had no idea how to say it. The policeman character had only just stepped out onto the page, so I had no roadmap for whether he was a kindly chap or a cynical one; whether he was keen to help or ready to suspect. His only previous lines had been fairly chirpy: “Wake up, Sir. Police” and “Steady on! No tricks, thank you kindly. Up you get!” So it wasn’t until I had read this line that I discovered he was not a fan of asylum-seekers, not in the slightest bit inclined to help and probably a reader of the Daily Mail.

When we write, it is perfectly respectable to describe in this way. An ordinary adult reader (and let’s face it, Tremain probably doesn’t get read aloud to one-month-olds very often) can deal with the fact that they take in the words and then apply the tone after the fact.

But it’s worth thinking about. Writing has long been recognised for lacking the nuances of the spoken word – emails and letters can easily be misconstrued and writers have always looked for ways to indicate intent in a smooth and effortless manner which would be unnecessary if only there were some way to print tone of voice.

My own particular challenge is sarcasm. I use it a lot myself, and my characters use it too. And yet, I get readers who miss that, and who completely misread my stories because they think the sarcastic character is either stupid or weak.

I don’t have an answer. Tremain’s description of the policeman, for all that it fell too late to help Sebastian’s comprehension, is a pretty good example of how to show (not tell) the character’s emotions and tone of voice, but you don’t always want to break up dialogue with a lengthy description, especially if it’s quick-fire, as sarcastic repartee so often is. So, I’m still looking for a shorthand for certain tones – cynical, sardonic, frustrated, sympathetic … and, most of all, sarcastic.