It is Friday, after all. So, better late than never, here’s my story for Rochelle’s own picture prompt this week.

It’s arguably not a story, but it came to me all at once, and when I typed the last word you see below, I noticed it was 100 words exactly, so I couldn’t resist the feeling it wanted to be posted as is. Apart from changing one adjective that didn’t seem quite in keeping, I haven’t changed it at all, but I welcome your feedback. 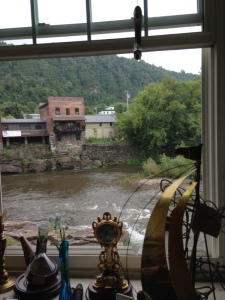 Everything in Grandma’s house was old. Grandma herself, obviously, had been alive long enough to remember black and white television, Nixon and the Civil War, and she had a telephone that plugged into the wall and you had to stand right there in the kitchen if you wanted to talk, because you were tethered there like a goat.

But the oldest thing in Grandma’s house was the golden clock. It never moved. Uncle Joe said it was right twice a day, but Grandma said it told the time she met Grandpa and was always right. I liked Grandma’s version better.

Something very different for me this week. First, a true story (in parts); second, brazenly exceeding the word limit. This story, all except the bit about the photo itself, is based on the romance of my maternal Grandparents. The story of how they met, fell in love and married is worthy of its own novel. Even at 150 words, this version merely scrapes the surface, so I hope you will forgive me its length.

Marry in haste, repent at leisure, so the saying goes. I don’t think my grandparents ever felt the need to repent – their love, friendship and companionship was evident to all who knew them and an inspiration to those of us who come after.

When he died, after more than 60 years of marriage, my Grandad was in the arms of his beautiful bride; she still misses him every day. And she still, when telling how they married, says “Married in a rush”, with a playful wink.

“Married in a rush,” she’d say, with a playful wink. They were, but not for the reason it implied – their first child wasn’t born for another seven years. Their hurry had all to do with avoiding separate postings. “There was a war on,” she would add.

There’s only one photograph. They keep it beside their bed.  She in a simple, grey dress; he a grey suit. The dress was blue in real life: a favourite, but worn many times before and since.

But what did it matter? They were in love, they had been happily married for fifty-nine and three-quarter years. A white dress is no guarantee of happiness. Still, when he saw it, he couldn’t resist. He pulled £100 from their pension savings – the very amount her father had insisted he prove he had before giving them permission to wed – and opened the door of the second-hand shop.