Back to a more literal interpretation of the picture this week – or is it?! Thanks to Rochelle for being our guide and Randy Mazie for providing the entertainment on this week’s bus tour. I love feedback! 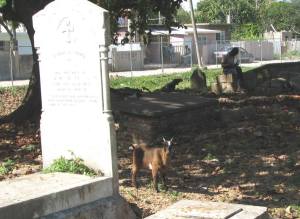 Lenny shivered under the stone angel. Bernie had said meet here at midnight, but then hadn’t shown.

Something moved among the yews. Lenny froze as it approached. He could see tiny horns growing from its head and he could hear it crunching on the bones of sinners.

Bernie’s playing a trick, he told himself. I should call him out. But his mouth couldn’t form around the words.

Suddenly, a heavenly light shone from the angel. The beast fled. Lenny ran the other way, as uncomfortable standing before God as before the Devil.

“Git off!” shouted the Pastor, waving his flashlight.